Who is Baby K?

“Baby K”, not even a year old and she has already faced struggles and hardship beyond what most could imagine. Her mother died bringing her into this world, giving her life.  Her father, grief stricken and unable to care for her and her 1 year old brother, sent the two little ones to be cared for by their paternal grandmother.  This house, full of love, is now home to 7.  The house itself is simple, consisting of a single room built of mud and dirt.   Animals run in and out, little light able to penetrate through the few small wall openings, and only two sole mattresses for all to share.

About a month ago a friend of the family mentioned to one of our DHI workers that Baby K was sick, and so we decided to investigate the situation and take her to a private clinic for a check-up.  The doctor, being very alarmed at her condition, urged us to immediately take her to the hospital to be admitted for severe chronic malnutrition.  And so our month long journey to stabilize Baby K began.

Her auntie  (only a teenager herself, yet totally dedicated to Baby K and loving her as her own child) and later Baby K’s father, stayed by her side both day and night, advocating for her care and tending to her needs.  Through their constant attention, it soon became apparent to all of us that the care at the hospital was very much substandard and Baby K’s condition was only worsening. Her father and our team knew that if she was to survive, she needed better care. 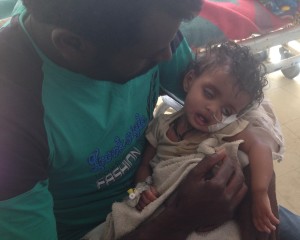 It was heartbreaking to visit Baby K in the ward – surrounded by other children who were also very sick and whose lives were very much in jeopardy, but sadly, very little was being done to help them. The very room that housed Baby K was also home to 12 other infants and young children, and their parents. Despite being a hospital, there was no clean running water and you could see the worry and stress of their parents as they faced the reality that their children may not improve.

Against the doctor’s insistence, we, as a team, decided to discharge Baby K from this first hospital in search of a better solution. We so desperately wanted to take all of the other children and their parents with us, but we knew we could not. Instead, we took time to pray with all of the parents and surrender their children’s lives and care to the Lord. We left with heavy hearts, but now recognize that the decision to not accept such poor care most likely saved her life.

Miraculously, God opened the doors for us to admit Baby K into another hospital.  It was truly remarkable as we had been adamantly told that because we had chosen to discharge her against the advice of the doctors, that we would be unable to admit her elsewhere (so sad and maddening).  Together we said a prayer – Ruth specifically praying that she would know someone at the second hospital – and then we stepped out in faith and took the risk.  When we entered the emergency room of the second hospital, we were thrilled to see that the nurse on duty was a previous classmate of Ruth’s and as a result Baby K was immediately admitted – Praise the Lord!

After nearly a month of recovery, today Baby K is home with her family, however, realistically we know that her struggles will continue.  Baby K’s  family is very poor and the struggle to provide good, nutritious food for she and her brother is a harsh reality.  Because she was born prematurely and had lost her mother in childbirth, her father had been told that “She will never make it.” This comment, while sounding insensitive and sad, is too much the reality. In developing countries like Ethiopia, when a mother dies the newborn’s risk of death during the first 2 years of life is 10 x’s that of a child whose mother is alive. 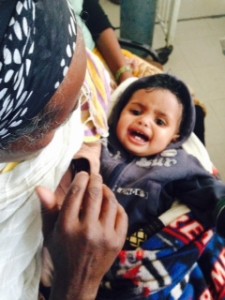 While we know she has a long road ahead, we rejoice in the fact that despite the odds she is still here, a precious blessing to her family. We thank Jesus for blessing us with the opportunity to help save the life of this cherished child, and it is with glad hearts that we have witnessed a renewed energy in Baby K’s father to fight for his daughter’s life, fueled by a hope that despite the odds, she may in fact “make it”! 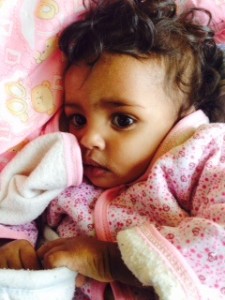 These sweet children touch our lives.  Pictures and updates on face book have had an amazing response, with people wondering how she is doing and praying for her to live.  We’ve even had children ask our DHI staff daily, “How’s Baby K?”  And nothing feels better than being able to say, “Praise God! She’s doing great!”